You’re currently using aniSearch in German. Would you like to switch to the English version?

Quelle: www.anisearch.de/anime/2322Blurb:
What would you do if you could leap backward through time? When 17 year old Makoto Konno gains this ability after an accident in her high school chemistry lab, she immediately sets about improving her grades and preventing personal mishaps. Before long however, she realizes that even innocuous changes can have terrible consequences. Changing the past is not as simple as it seems, and eventually Makoto will have to rely on her new powers to shape the future for herself and her friends.

"For those of you who thought the ending was beautiful and "want a sequel", you need to watch the anime again. And I'm not just saying you missed a pretty obvious plot point, I'm saying the sequel to this anime is essentially this anime! Do you remember the aunt who could *also* time-travel when she was young? Do you remember her occupation? Art restorer! And not just any art restorer - the art restorer who has been working on Chiaki's painting for years. The art restorer who could once travel through time and whose heart was broken by someone who told her to wait for him. Look, all of the events of this movie were clearly of Chiaki's design. The only unknown here is his motive for having the painting restored. But for those who still don't get it, here's how it goes:

Chiaki, person of a distant future, wants this certain painting restored, but restoration of fine art takes a long, long time (evident by the amount of time the Aunt has been restoring the painting, and yet it still is not finished). He goes back to the earliest known time that the location of his painting is known. He finds a high school aged girl who is about to graduate and doesn't know what she wants to do with her life (no strong outside ambitions). Then, he 'accidentally' loses one of his time devices in just the right place so that the girl gains the time travel abilities. Having no strong ambitions, she wastes most of her charges on trivial things. Along the way, Chiaki lures her into loving him. Then, after she runs out of charges, a critical event happens that makes her wish she could go back and change it (like the accidental loss of a friend).

At this point Chiaki 'reveals all': that he's the cause of her time traveling, everything about the painting, and the fact that he used his 'last' charge to save her/prevent the terrible event/etc. Afterwards, he disappears telling her that it's because he's broken the law about revealing time travel to people from the past (IMPORTANT) and she now wishes she could have him back, sick with love for something she now knows she can never again have (don't we always want most what we can't have?), and sick with guilt over being the cause of his inability to return home.

Eventually, she realizes that the events of her final leap were reversed by Chiaki and so she still has 1 remaining charge. Thus, she uses it to go back in time to a point where she can accept his confession of love (likely close to the time of the initial incident ensuring she doesn't alter the future too much beyond this painting business...). There, she reveals all she knows and assures him that he can go home (out of concern that he won't ever be able to again) and that she will take care of his precious painting so that he can see it again. Of course, she's secretly hoping he will do the obvious thing for someone in love (which she 'knows' he is, even though he hasn't at this point revealed that to her), and say “No darling! I can't leave you! I shall stay in your time with you, forever, and love you!” and so on, and so on, and so on. But nope – he actually already has what he really wants: Someone to devote the rest of their loves to restoring his painting.

Now, because the restoration of this painting will take longer than a single persons life, and also because his original target may lose interest and move on, he has to continually baby the painting all the way to his time, art restorer by art restorer. So, he goes back and repeats the process with another girl. Rinse and repeat, rinse and repeat. My friends, this is one of the most sadistic endings to a chick-flick anime I've ever seen. Sure, it's been sugar coated for all of you who are easily blinded to what is actually going on, but in reality this man is a terrible con artists, guiding victim after victim into wasting their lives for his selfish ends. Truly a marvelously thought out anime plot: Much more sophisticated in the end than the beginning would suggest." 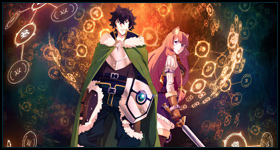 Gewinnspiel: „The Rising of the Shield Hero“